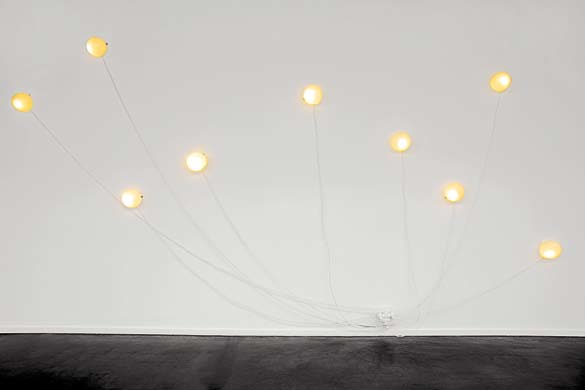 Light is ontologically associated with the creation of the illusionist space of the painting. In the classical tradition, it is the most widely used way of composing a space, of creating depth, and rendering tangible the visual experience offered by the picture. Véronique Joumard continues the history of representation, but sidesteps illusionism. Since 1985, she has been producing light installations (systematically titled Untitled), picturewalls, and mirrors, all juggling with the codes of Western painting. In them she presents no longer just the retinal and aesthetic effects of light, but the actual conditions of its appearance.
With this Untitled (1993), nine glass globes containing bulbs are connected to adapters: all the elements in the phenomenon of the arrival and distribution of light – glass globes, bulbs, wires, plugs, adapters – are exposed. She ‘sets up a connection’, electrical and graphic, between the motif (the nine light globes) and the building housing it, a kind of nurturing organism of the work. Of course, the use of light is not something new in the field of the visualarts. What gives Véronique Joumard’s work its forwardlooking dimension is the attention paid to the phenomenon of artificial, industrial light and the evolution in production methods.
By calling all these ‘light’ installations ‘Untitled’, the artist is standing back. In accordance with the famous statement uttered by American abstract artist Frank Stella: ‘What you see is what you see’, Joumard seems to be refusing to load the work, in any authoritarian and prescriptive way, with a meaning not visible to the naked eye. So is Véronique Joumard a post-Minimalist or post-Conceptual artist? The use of industrial light and neon actually places her in the line of Donald Judd and Dan Flavin. The tradition can be read in the presentation of the work’s materials and in its relation to the viewer. She invites the latter to physically experiment with space and reflect on the conditions in which the image, or more specifically light, appears. Yet she stands aloof from the American Minimalists in so much as the work becomes a ‘specific object’,1 whose function is no longer to reveal the surrounding space, but to explore its constituents differently through a scientific and technological filter. Light is no longer just a subject of study, but the actual object of the artistic work – its very material.
It is likewise this withdrawal of the author’s single gesture that prompted her to produce the Mur-tableau (at Benifallet in Spain) in 2000 and the Maison-tableau in 2009, a garden hut installed in the Jardin des Tuileries, in Paris.
The Maison-tableau was a participatory work in perpetual transformation. Covered with a green classroom board paint, the work became a surface for the public to write or draw on. Traces of past visitors’ visits, drawn or written with coloured chalks, could be erased by other participants or by the elements. This ‘picture-house’, set up in a museum garden, became a collective, precarious work, never completed – a work in progress. It was a slate-green monochrome, initally free from any inscription. But by entering the public place, it became a sort of social allegory of art.
Through her work, and more especially through this work, Véronique Joumard perpetuates the relationship between work, politics and the memory of painting. In 2009, for his solo show ‘Léger vent de travers’ [Light Side Wind], Noël Dolla, an artist whose work is represented in the MAC/VAL collection, installed in the museum’s garden a rickety cabin, and created in the exhibition space a ‘classroom board’ bearing the traces (erased by the artist this time) of the inscriptions of people working in the museum (fitters, exhibition curators, painters and staff) during the mounting of the exhibition. The work stood at the crossroads of all these dovetailed memories: memory of the line, legacy of classical art, present time of the inscription, future time of the uncertain development of the work exposed to the whims of weather and visitors alike.