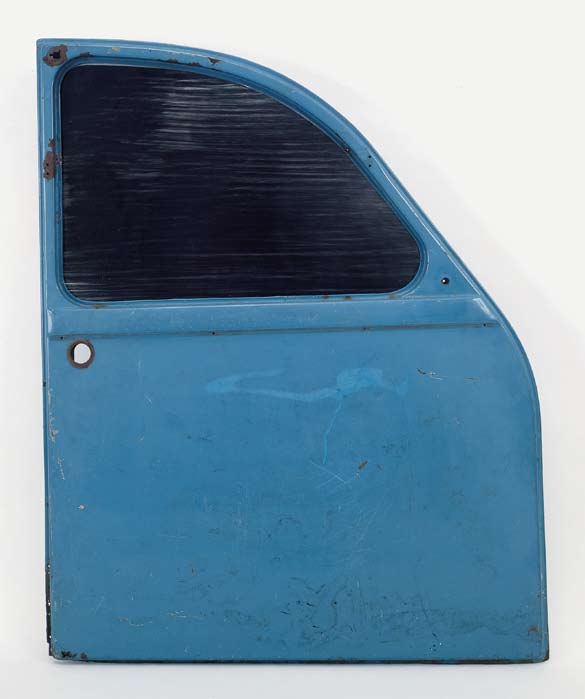 A very long time ago, and at a very early age, too, Pierre Buraglio was a brushless, canvasless painter. From 1968 to 1974, he elected to be a paintless painter, abandoning the ‘trade’ to join his worker comrades in the factory. For many years he preferred the craftsman’s tools to the artist’s, questioning – like some of his Supports-Surfaces and BMPT contemporaries – the very act of painting, along with its materials and its reality. And yet, when we re-read about him, what a determinedly, quintessentially, faithfully painter’s life.
Pierre Buraglio was born in the Val-de- Marne, son of an architect, grandson and nephew of Italian builders settled at Maisons-Alfort. He lived back in the family home, where he painted and drew on the millstone walls built by his forbears, who also built the famous Rock at Vincennes Zoo.
In his lengthy friendship with Raoul-Jean Moulin, Pierre Buraglio was involved with the museum project, from its ‘invention’ right up to now. Today, he says that, ‘at the time’, he wanted a museum that would make the link between history and contemporary art, whether a matter of resistance or politics. Essentially, however, is this not the case today? Is it not a matter of resistance in the commitment and expression of artists, in their vision of the world, its critical illumination, and of casting doubt on and challenging reality and the state of the world? Is this not what Pierre Buraglio himself is after when he rejects the painter’s traditional practices, tools and gestures, to rather gather, stick and deal with hundreds of packets of Gauloises Bleues (Gauloises, 1978)? For those who have smoked them and held them, are these simple objects turned art motif not souvenirs of their condition? Fenêtre (1977), an object found on a building site, an object turned painting, situates the imaginary landscape within its frame, subdivides it with its panes, colours it with this glass chosen by the artist; it also describes the humdrum daily round of these little people and their surroundings. The blockhouses on the Atlantic coast that the artist is painting today take those unforgettable signs of the German occupation during the Second World War into the field of present-day painting. But there is no lesson to be drawn from Pierre Buraglio’s oeuvre, just invariably this history of pain perdu (French toast; literally, lost bread), as invented by Alfred Pacquement – retrieved materials combined to create a new work – but also History and the landscape ‘linked’ together, and subjects brought back to memory — subjects of questioning. He was one of the first artists to set up the FDAC (Fonds Départemental d’Art Contemporain) collection and believe in the museum. Since then, we continue to follow his activities, for while his oeuvre is changing, it is still investigating the possible roles of painting and its reality. Having gone beyond calling into question the materiality of paint(ing), Pierre Buraglio is still, if differently, questioning, elsewhere, but all the time: in his mastery and in his virtuosity, in his history – that of art and of the memory of the great masters. In his constant humility, with the pragmatism of the craftsman, he is today showing his work as is, no trickery; he lets effort, and even errors, do their thing – genesis of human work.
So we have come up with a circuit within this collection that he knows and has supported to tell the tale, in dotted lines, of the history of his painting. His work, which makes room for trace and loss and which makes absence so present, finds its way at the heart of the installation devoted to memory. For Pierre Buraglio’s oeuvre is above all about traces and memory. In it, all forms are cut out, hollowed, reassembled from scraps. Sampling and taking were his first painter’s gestures: window frames, masking tape in bodywork shops, and sticking them together again, marked by car paint; taking the door of a Citroen 2CV and replacing the window by a dark, almost opaque stained-glass window, the imaginary journey gets under way; keeping his diary and crossing out the days as they pass, along with projects and meetings that have been and gone. Painting, these days – with its stretcher, canvas and traditional tools – is on the way back, but it is also always cut-out and assemblage, absences and hollows, like the ‘Rochers de Vincennes’ series, a repertory all on its own of all the possibilities of Pierre Buraglio’s praxis.
The past is always present, indelible and conserved. The motif has come back, but essentially, has it not always been there, with the object valid per se? Motifs are nowadays represented, rocks, millstones, blockhouses, the sea... and then art history as an inexhaustible and relentless source of confrontation, apprenticeship, and humility. Pierre Buraglio these days confronts the painting of masters great and small, just as he has long been colliding with reality with a sincerity that bans artifices and reveals man in all his desires and weakness.