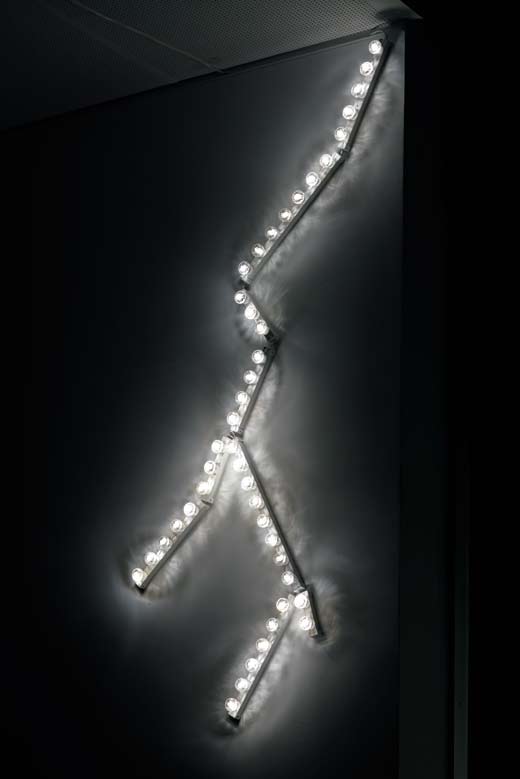 In the first half of the 1990s, self-taught artist Pierre Ardouvin came by a space in Montreuil (an eastern suburb of Paris), which he ran with Véronique Boudier and Jean-François Guillon and where many young artists had their first shows. ‘A l’écart’, which was active for several years, enabled Pierre Ardouvin to hone his praxis.
His works shift in a recurrent way from ‘collage’ to ‘bricolage’. He is a ‘motif’ artist, the motif being our society and what it generates. Pruning a ridiculous plastic Christmas tree (Élagage, 1995), bedecking a pair of shoes with springs ‘the better to bounce’ (1995), presenting a pair of bunches of faded artificial flowers on kitsch tables (Bouquets fanés, 2010), a mock fur coat, dropped on the floor, attached to a leash (Ne me quitte pas, 2008), not forgetting, in Love Me Tender (2001), a dodgem car getting deeply bored on a 4 × 3 m track without even being able to spin round to the eponymous tune.
Pierre Ardouvin’s art is based on recomposition, the offbeat, humour that falls flat, the step that trips us up, the mishap. He tells us, with a ‘cheap’ vocabulary, about basic materials, standard structures, formatted songs, and a brace of ‘collective autobiographical narratives’. Minor detail: his installations, his ‘augmented’ readymades, and his environments are regularly preceded by watercolours. Each one of Pierre Ardouvin’s works must be capable of triggering affects and emotions, by virtue of his capacity to bring together known and identifiable objects that are imbued with sociological and historical resonance: lino, plywood, light bulbs, car, record player, postcard, sofa, music.

Éclair, formed by 43 bulbs fixed to the wall, is part of a larger series, and its execution was preceded by drawings. The bulbs produce a flash every two seconds. As a symbol of bedazzlement, as ephemeral as it is grandiose, but also of instant danger, the flash refers us to a fairground attraction and an unpleasant, not to say epileptic spectacle. It is perhaps also the metaphor of memory, with its flashes and failures, a materialisation of the flashback, between black holes and the spark of genius, triggering, or not, the lifecycle.