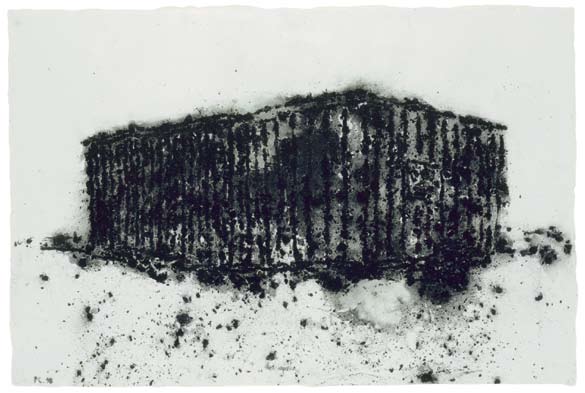 In the early 1990s, Philippe Cognée, an artist with an already marked fondness for materiality, developed an unusual pictorial technique using photographic composition and wax rendering, which is his personal style these days.1 His technique is demanding. ‘It works better with highly structured images with rhythmic elements, when there are lines, like in motorways, building perspectives and supermarket shelves, for example.’2 The containers and construction site cabins, which the artist introduced into his repertory in 1995, meet this requirement. They also fill the drawings of the period, like this Container from the series ‘Proliférations’.
Technically speaking, the crushing of the drawing responds to the forced smelting of the paint. Covered by a plastic film, the composition with graphite pencil and charcoal on a thick ground of still damp white acrylic is pressed under a roller that the artist passes over the surface. The bits of charcoal explode. The line breaks up. The roughness of the drawing’s chalky surface echoes the textural effects of the paint. It is easy to make out the initial photographic composition: a container, framed very close up, isolated in a horizonless landscape. This commonplace and seemingly neutral subject, with a frontal quality worthy of Bernd and Hilla Becher, fills the space. Although it conjures up the industrial sphere, the treatment nevertheless endangers any neutrality. Thanks to the use of charcoal, the container seems charred as soon as it is transferred to the paper. The break-up of the line, in a dark and hazy blur, loosens the constructive lines of the object depicted. Is this a container or the vestige of an ancient temple? There is a chronological confusion of a time that has not stood still. The monument vibrates, snorts, its disquieting content throbs dully, and it is the entire composition that moves to the rhythm of the detachment of the charcoal grains.
Cognée’s method stems from a balance between de- and con-struction; the blurring of the image by immediately summoning up another. The subject, which is absorbed by the acrylic ground, is simultaneously renewed on its surface. It is memory; a memory fashioned by the erosion of oblivion, the way the shore is by the sea.3 So, more than a vague container, more than a memory of a container, Phlippe Cognée re-enacts, not to say represents, the very process of memory.

1. Philippe Cognée’s visual sources are real images subjected to the filter of the photograph, the digital screen or the photocopy. This photographic sketch is transferred to the canvas and coloured with encaustic, before being re-covered by a rhodoid film, which the artist heats with an iron, then rips from the painted surface.
2. Philippe Cognée, interview with Olivier Weil, in Bilbao, Nantes, Joca Seria, 2003.
3. Marc Augé, Les Formes de l’oubli, Paris, Payot & Rivages, 2001, p. 29.