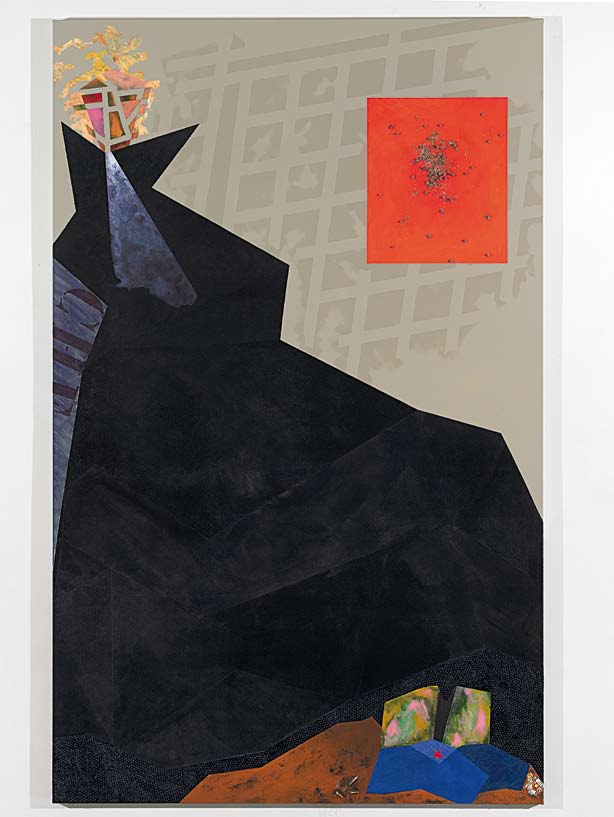 For more than forty years Noël Dolla has been working on one of the most unusual painterly ventures imaginable, constantly exploring the fundamentals of painting itself, in a spirit of abstraction. Dolla’s entire oeuvre is an exercise in memory — the memory of the gestures and works that have gone before him; the memory of the studio, of tools, know-how and techniques. This memory is permanently called into question and ‘forgotten’ in a form of amnesia. Like a thousand and one tennis balls bouncing on a pebble beach. From the outset, his work has proceeded by way of series, remakes, repetitions, junctions, contradictions, reversals and sequences. It seems to be torn (lured?) between two apparently opposing directions — that of a radical deconstruction of painting, of its concepts, methods, ends, tools, and that of the artist’s subjective, not to say private and baroque, engagement with his oeuvre. He fondly reminds us that he is tacking between Supports- Surfaces and Fluxus.
This dynamic is particularly at work in the recent developments of his work. We can see a return of the figure and a shift in historical moorings (from Newman, Matisse and Duchamp to Courbet, Géricault, Malevich and Titian). My Mother II presents a son’s pictorial and painterly meditation on his mother, who is suffering from Alzheimer’s. This large figure — lady in black — brings to mind the allegory of Memory described by Cesare Ripa in the 16th century. References to art history are also combined with references to previous works of his own. On the top right, for example, can be seen a remake of the picture Dog Food (2007), a representation within the representation. At bottom, the ankles and shod feet call to mind the film Love Song (1973–76). Also featured are revolutionary figures (the word CHE on the left of the picture), because, as Dolla likes to remind us, ‘painting is a political statement’. Political in the broad sense of the term: a force standing up to the imposed order, a force of self-construction. We also see the recurrent motif of the red star that permeates his oeuvre, as well as, in the bottom, glued cigarette butts, like so many bits of reality.
Method is meaningful: here the picture is constructed layer by layer, using adhesive tape to create outlines, by exploring the abstract dynamic of the surface. Each layer is autonomous and their combination, in a certain assembled order, gives rise to figuration. The picture is gradually invented in the course of its execution, almost blind. It rises up, without any retouching possible.