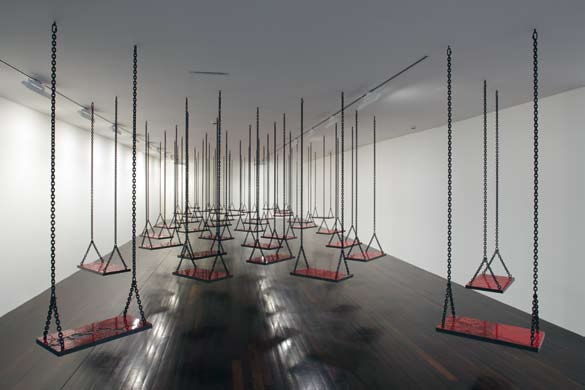 Mona Hatoum is one of the greatest artists around today. She is nomadic and the world is her metaphorical oyster as she ceaselessly travels through it, redrawing its boundaries trip after trip, domesticating it as she goes – she whose family had to learn how to live in a land other than their own.
During her incessant peregrinations, Mona Hatoum answered our invitation and spent a few months in the MAC/VAL residency programme, from November 2009 to May 2010. Mona Hatoum’s parents were originally from Haifa, in Palestine, the land they had to leave in 1948 because of the war with Israel. They settled in Beirut, where Mona was born, grew up and did her secondary schooling, in French. But it was English she eventually chose, the language her father spoke at the British embassy, where he worked. In 1975, she went on holiday to London, where she was thinking of studying. Which is precisely what she did: the civil war in Lebanon had started, and she could not go home.
A whole family history was branded by exile, departures, loss, and memories taken with her or lost. A whole life spent checking and situating her own existence, first through performances, with her own body (leading her to be linked with a feminist trend in art), then by engaging with the symbolic world of objects. With them, and through them, she draws onlookers into perceptible but also conceptual experiences — and experiments.
Mona Hatoum’s œuvre touches you because, at first glance, it has the familiar and moving character of something we know, and recognise; it’s the stuff of memories. Her visual vocabulary is that of the living and the lived, of everyday objects, of what surrounds us and forms us: beds, kitchen utensils, maps, pillows and balls of hair – objects that touch us, and are touched by us. With this vocabulary, Mona Hatoum sweeps us into a strange world, a terra incognita; after the time of familiarity and rediscovery, objects escape their primary sense and rise up against the state of things. Out of scale, made with materials alien to their primary nature, they become unrecognisable and unknown, laden with another history.
Because the world is in a state of fusion, because boundaries and borders are artificial, the products of the geopolitical forces that dominate people, because these latter suffer from economic and political ambitions, and because there are two worlds that look at and confront each other, First World and Third World, West and East, Mona Hatoum questions the impossible situation of being human. Balancing on the tightrope of history, people try to forge their path in an unstable world, to settle and create a place for themselves.
This is the situation conjured up by Suspendu, a one-off work created by Mona Hatoum for the museum. She says that she accepted the MAC/VAL’s invitation because, in Vitry, she discovered individual destinies echoing her own family history, and destinies today held in an architecture whose utopia of yore no longer in any way corresponds to contemporary reality. Above all, Mona Hatoum has a desire to be forever creating, and coming up against new situations and new areas of expertise. These ‘suspended’ destinies, still in the making, are conjured up by a forest of swings that trace in space an impossible and moving mapping of the world. Each seat is engraved with the map of a capital or other city originally associated with new arrivals. Cut out cleanly in the wood, the plans, in their layouts, are so many stigmata of history: geometric and modern plans, plans with broken lines, planless plans. The contrast with the chains is brutal; heavy and thick, these chains retain more than they evoke flight and freedom. The seat here is as if nailed to the floor, imprisoned. Although the swing, a cause of dizziness, is a sign of childhood and games, and even, in France, a place for amorous trysts, in this setting it becomes the symbol of the weight of memories and the restrictions governing what one can do with one’s life.
The strength of Mona Hatoum’s œuvre resides in the way it involves viewers physically. Having no landmarks or compass, they try to find the names of cities and towns, to understand this imaginary geography. But they also try to blaze their own trails in this unstable and dangerous world, which seems to unravel as soon as it is broached. It is an invitation, in the guise of a game, to live the chilling experience of the exile.