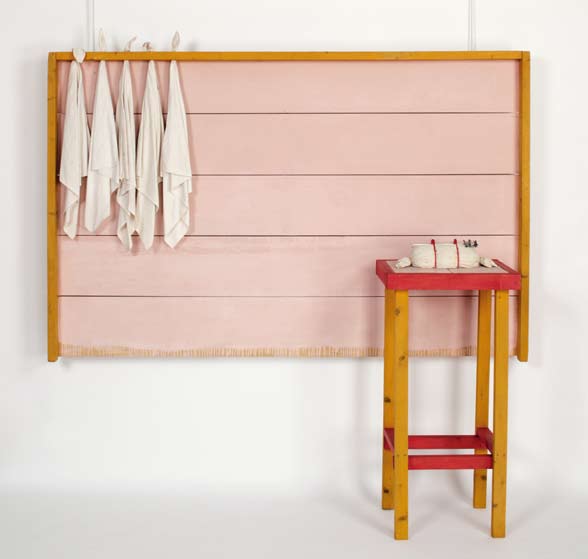 After studying at the Arhem School of Fine Arts, Mark Brusse left Holland in 1959 and went to Paris. His work (‘Clôtures’ [Enclosures] and ‘Soft Machine’ series) began with wooden sculptures, large ambiguous assemblages conjuring up useless machines, torture instruments and huge farm tools. They were made with found wood and various metal objects found in the street. During the 1960s, he lived in Paris, New York and Berlin. Switching countries encouraged encounters and visual experiments. Without belonging to any one particular trend, he was close to several. In Paris, Nouveau Réalisme by dint of his use of materials taken from reality; in New York, Minimalism by virtue of the size and monumentality of the pieces produced; in Berlin, Fluxus, happenings and street actions. In the 1970s, he devised a ‘Don’t Forget’ series, calling to mind the Dadaist use of wordplay and nonsense, and Surrealism, through its erotic dimension. In ‘Privat Clinic’, a series from the 1980s, Mark Brusse seems this time to be closer to an expressive use of objects and materials. Their properties become symbolic: hardness of wood, drips evoking wounds, laboratory and hospital pipettes, all contrast with the gentle softness of cushions, the comforting presence of the house, and the repetition of the daily round conveyed by towels.
Here we can see an influence or echo of Joseph Beuys and his energetic and metaphorical recourse to recurrent materials: grease, copper, felt. There is also a kinship with Art Brut in the absence of formalism, through the direct capture of the onlooker and through the expression of an inner necessity.
The installation evokes creation as a private, obsessive, repetitive exorcism. The title Privat Clinic, common to the whole series that the work belongs to, points at once to care and individual character. This is an anti-monument, something that does not transmit: neither an episode nor a memory. And yet here, everything speaks of memory. Buried goingson, unspeakable words, distorted images – we are in a psychic landscape: objects are charged with alluvia, original sensations, and disguised affects.
But it is because they are not explicit that we can invest them with our own (hi)story. And it is because this memory is not collective that it becomes ours.