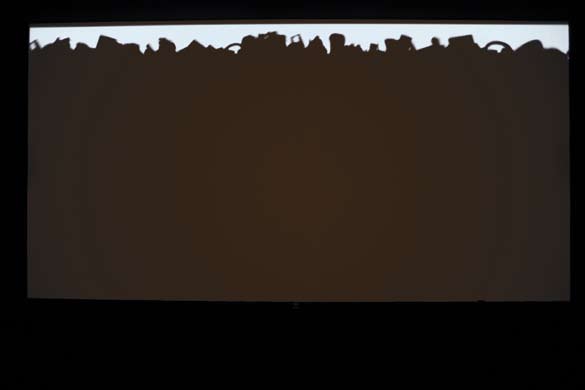 Shilpa Gupta trained as a sculptor in Bombay (as the city was then called) between 1992 and 1997 and has been exhibiting regularly in India since 1996, and in various international shows since 2001. During her two-and-a-half month residency at the MAC/VAL between July and October 2007, she produced three works: the third version of Shadow, Memory and Don’t worry, you too will be a star. Shilpa Gupta explores the potential of new technologies and creates websites, touch screens and interactive projections, all means of communication that have now become familiar and used on a daily basis. Visitors are invited to experiment with and question racial violence and organ trafficking in Blame (2002–2004), and the death of loved ones in armed conflicts in Sans titre (Demi-veuves) [Untitled (Half-widows)] (2006), pieces shown at ‘Lille 3000’ in 2006.
In the ‘Shadow’ series, the shadows of viewers, caught by the camera, encounter projected shadows on the white screen; these latter, shadows of objects and dolls, as if dropping out of the sky, are stopped by the visitors’ shadows. The first version of Shadow (2006), created for the Halle art centre, mingles spectators’ shadows with those of other figures walking, dancing, and jumping, while in the second version (2006), made for the Liverpool Biennial, it is shadows and houses and bird silhouettes that seem to be falling and crossing space before becoming attached to visitors’ shadows. In this third version, the objects are not clearly identifiable because the changes of scale give free rein to the imagination. This interactive video game involves spectators both individually – causing them to move about both in space – and collectively, allowing them to swap between themselves the objects that are clinging to their shadows. At the end of the cycle, the shadow theatre makes the visitors vanish, drowned in a sea of objects. To produce these interactive installations, Shilpa Gupta enlisted the help of a computer programmer and a sound designer. Her work is a team effort, just as the making of any film is.
In a more playful vein, Shilpa Gupta developed a metaphor around memory and body, with falling objects symbolising an irreversible past that ‘clings to the skin’, as suggested by the sound and the words uttered at the end of each cycle: ‘His dead, our dead, your dead, our dead, her dead, Is the land not well marked? Is the sky not able to hide and drink it?’ The artist’s idea is more serious than might appear at first glance. Playing on the fascination for appearances and technology, she rails against the paradoxes of our societies. How do we react, when we look at the images? How does media propaganda modify the way we behave?
Memory tackles once again the issue of the past, with the letters of the work ‘memory’ cut out of the museum walls: as if drilled into the concrete wall, the work both permits us to perceive the exterior of the building through the slits of the letters and lets in the light of the sun’s rays, which vary according to the time of day. These graphic shafts move imperceptibly, taking on a different form and intensity, depending on seasonal and climatic variations, and even the time spent on a museum visit. This highly poetic work also refers to memory and our recollection of the building itself. Visible from outside and inside alike, it plays with transparency, solids and voids, and fleeting memories that we may retain from previous visits, opaqueness and instantaneity of memory. Don’t worry, you too will be a star is a slogan in fairy lights. It heckles visitors and refers them to their desire for celebrity, questioning the usually outstanding, ‘unattainable’ character of the star. Excessive media exposure leads to a loss of aura for stars, while at the same time offering everyone the chance to attain this status. While looking as if she is reassuring viewers, Shilpa Gupta also warns them about our fascination with fame and its vacuity. What are we to do about the deceptive lure of celebrity, about banality, and how are to ‘come to terms’ with our history and our past. How are we to live?
Shilpa Gupta’s oeuvre is many facetted, but these three very different pieces all explore memory, resorting to the use of light, natural and artificial alike, with a mastery of new technologies that makes it possible to catch the viewer’s attention while questioning him or her about individual and collective issues.