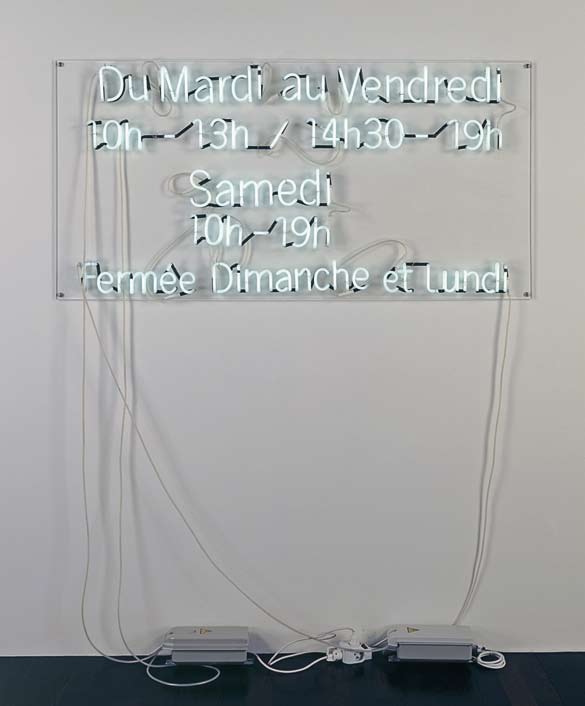 Jonathan Monk was born in 1969, a crucial year for the declaration of the premises of Conceptual Art1. It may be as well to be wary of any form of biographical determinism, but this chronological coincidence is nonetheless resonant. For Monk’s art has two main sources: his family history and his deep interest in the history of art, that of Minimalist and Conceptual Art, certain forms of which he reactivates. But over and above mere quotation, it is above all the spirit of Conceptual Art that he summons up in his works. His multifaceted praxis does not admit to any specifically personal style. The Gallery Hours series presents neon signs giving simply the days and hours when the galleries selling his works are open, one such being the Yvon Lambert gallery in Paris. By thus appropriating the visible signs of the dissemination of art, is the artist questioning its place in society? At a very early stage, Monk preferred to announce and display himself outside contemporary art venues, exhibiting in bars and even in his bathroom. But more than an idea or a parody of galleries, Gallery Hours transcribes a timetable of activity. The neon, set in all the various venues to the local time of the Paris gallery, lights up then goes out at the times announced. A closed relationship between a declaration and a fact that calls to mind some of Joseph Kosuth’s works. But Jonathan Monk turns his back on the objective and autonomous tautology of Conceptual Art, factoring in an exogenous parameter. The activation of the work, regulated by the art dealer’s operations, imposes a foothold in reality.

The public, in its relation to the work, is permanently dependent on its commerce – their presence alone is not enough to reactivate the piece. To see the sign lit up, people must go to the museum when the gallery is open, at the times displayed. The work proclaims its own rule, at once paradoxical and frustrating. In a consumer society, is culture so under the yoke of the economy? Are we looking at a strategy of failure with regard to diffusion by exhibition? It is not certain. Perfectly synchronising visibility and activation of the work presupposes its definitive presence, with no sale, at Yvon Lambert’s. Being able to view the work thus stems in the end from the failure of its commerce. Having transgressed the rule, the museum is condemned to wait for... the gallery to open.