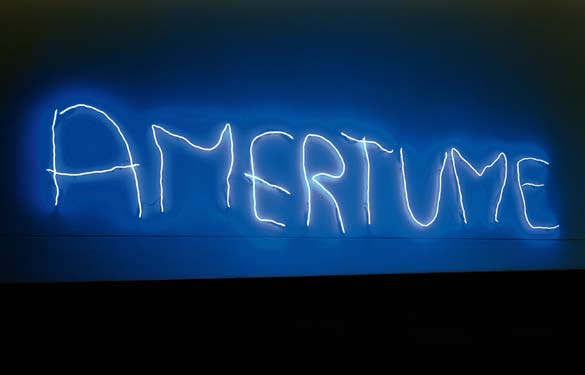 Steeped at the time in the punk movement, new wave music, alternative rock, the alternative avant-garde and counter-culture in general, Claude Lévêque was admitted to the École des Beaux-Arts in Bourges in 1970. At the end of that decade, he was involved with the artistic programming at the Nevers Maison de la Culture, where he exhibited major artists in the Body Art movement (Gina Pane, Rudolf Schwarzkogler, Michel Journiac) and organised concerts and experimental film programmes.
In 1982, he took part for the first time in a group show, at the Créteil Maison des Arts with an installation, Grand Hotel, which immediately attracted the attention of the art critic Michel Nuridsany. He subsequently developed a multi-facetted oeuvre presenting a deconstruction of our society’s codes and references, by means of retrieved and recycled objects. His sculptures and installations conjure up, turn by turn, themes of childhood, ideological conditioning, ritualisation of the body, human deprivation, loss and alienation, and all the resulting violence and revolt. In the 1990s, Claude Lévêque focused more on objects reflecting collective representations that were invariably alienated, not to say disembodied by the light device. He then veered towards in situ work. He developed immersive installations, where the elements drawn from reality and transfigured by light and sound form staged arrangements that summon both the subjective and the collective imagination.
These arrangements bring to mind the language of film, with the movements of the viewer replacing the movement of the images. They involve all our cognitive, sensory and affective faculties, with the various elements helping to project us onto another stage – that of the imagination, games, dreams, and nightmares. Acquired by the MAC/VAL in 2005, Datapanik, an in situ work created at the Juming Taipei museum in Taiwan in 2004, illustrates this approach perfectly. Conceived as an installation, it invites you to stroll through a night-time cityscape. Large buildings made of fabric, given life by the air from a fan and an intimist kind of lighting illuminating the scene from within, evoke a poetic vision of the suburbs, where the private and the universal, the sensual and the ghostlike, and the familiar and the strange all come close. The title of this installation is like a counterpoint: it refers to panic when faced with data, to the illusions and decoys of the information society, while at the same time making reference to a piece by Père Ubu, the legendary punk rock group from Cleveland, itself probably inspired by the science-fiction film Panic in Year Zero (End of the World), made in 1968 by Ray Milland.
In the 1990s, Claude Lévêque tended more and more to a sparseness of forms, a rigour of gesture, and an artistic vocabulary emphasising his kinship with Minimalism, especially in his way of playing with perception and giving pride of place to experiment. Light, which is omnipresent in his work, became a material in itself, with its volume, thickness and colour; and the neon writings, there since 1993, became more and more salient.
Although a number of artists, with whom Claude Lévêque shares the goal of creating ‘special visual states’, make use of neon (Alberola, Raysse, Morellet, Buren, Höller, Nauman, Kosuth, Koons and, above all, Flavin), many use it to appropriate advertising messages, political slogans and for other wordplay.
Claude Lévêque’s neon works draw more from a repertory of quotations, at once autobiographical and borrowed from a contemporary mythology. Conceived with a view to giving rise to ‘zones of reactivity’, they serve to create poetic spaces akin to dreams. And although these neon works have no messages to get across, they address the visitor in the most immediate way and draw him, so to speak, into the depths of his being.
In 2005, Claude Lévêque produced for the MAC/VAL an installation made of blue neon, where the French word amertume — bitterness — communicated his feelings about the world, through the tremulous writing of the young Léo Carbonnier. Amertume is part of a superbly provocative series of words, which the artist scribbled in coloured neon. In it, turn by turn, you can find irony, selfdisparagement, a sense of failure, rage and melancholy: Nous sommes heureux [We are happy], La vie est belle [Life is beautiful], Vous allez tous mourir [You’re all going to die], Goût à rien [Don’t like anything], En finir avec ce monde irréel [To hell with this unreal world], Dansez [Dance]...
These words, shouted like counter-slogans, call to mind the nihilistic radicalism of the punk movement, with which they share a disillusionment with the state of the world. Like punk music, their aim is to reveal the everyday goings-on of a whole system of references and processes, at work in spite of us, to bring about — let us hope — a lasting change in our perception of things.