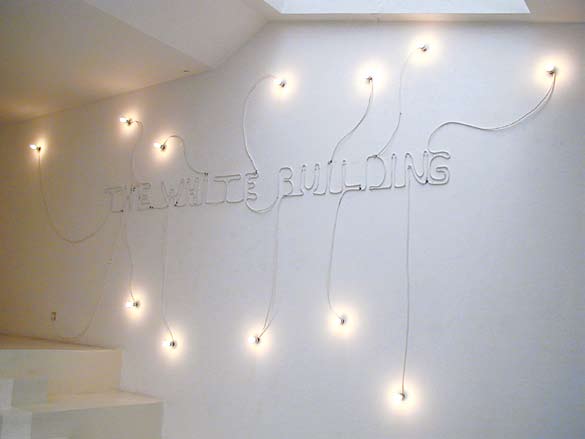 Jean-Luc Vilmouth hallmarks the art scene with his special presence, highlighting the reflexes and dysfunction of the world, proposing new ways of living together, new types of relationship. In the early 1980s, he linked up with the artists involved with new British sculpture and, like them, appropriated the world of objects, which became his formal vocabulary. He called himself ‘the friend of objects’, their ‘augmenter’, and he gave them a real power. Using them as intermediaries, but remaining at a remove from the everyday, he reveals their quintessence, creating unexpected and intriguing situations in the public place, the better to question and challenge it. Nature is also one of the subjects of his work: a nature that is rendered artificial and comes into conflict with the human race. The distance from the world maintained by Jean-Luc Vilmouth is nevertheless something that is the result of great attentiveness. He is forever criss-crossing the planet, either on his own initiative or in response to invitations, nurturing his critical vision of it as he does so.
White Building came out of trips to Cambodia in 2005. Invited to Phnom Penh, Jean-Luc Vilmouth was struck by the existence of a building constructed in the 1960s by an assistant of Le Corbusier, the Cambodian architect Vann Molyvann, based on the utopian model of the Cité Radieuse, the functionalist European project that he took into a shantytown. The inhabitants set up home in this unfinished building, and transformed it. Life held triumphed in it, as did local customs.
This ensemble, which was on view in the museum’s second show devoted to the issue of being present in the world (2007–2008), consists of three pieces, with only one, The Name, being exhibited today, serving as a souvenir of the previous exhibition and of the work in its entirety. White Building bears witness to an architectural and social utopia abandoned in the face of political changes and to the needs of everyday life; today, only its ruins remain.
It is from this distortion between project and reality that the beauty of this piece emerges. It is an installation of objects and drawings, together with this name in light, the wires on the wall calling to mind a precarious electrical installation, but also the ramification of projects, and life in the making.
Today, the light sign resurrects the memory of the work and that of the utopias that continue to illuminate life. Often disappointed, and often forgotten about, they remain a beacon for the future.