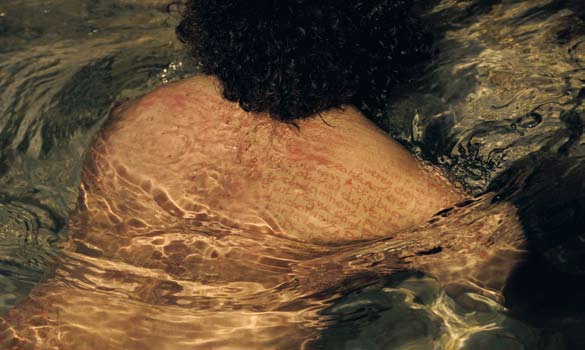 Halida Boughriet is a young French artist who has already found her way, rooting her work in the state of the world, the authoritarian moments we call wars, politics and religion, and the imprint they leave on people. Thanks to her Algerian origins, her development has been influenced by several rich cultures. As sources of observation and questioning, they also prompt her to relativise their data, through poetic gestures about the nature of what lies at the basis of human relations. As soon as she graduated from the ENSBA (Advanced School of Fine Arts) in Paris, then in New York, where she studied at the School of Visual Art until 2005, her eye was already that of a photographer and video-maker. She captures people in their environment, frequently an urban one, revealing their fragilities and their doubts. Her video Action (2003), which the Centre Pompidou has just acquired, explores the ambivalent, not to say impossible, relations between the cultures of the West and the Third World, conveying the differences through the varying reactions to her gesture of reaching out to touch – a hand barely brushed against – from the most violent to the most restrained, by way of a whole lot of indifference.)
In her residencies (in Bosnia, Africa and, most recently, Algeria), Halida Boughriet revealed in a more or less head-on way conflicts and their scars, recording life that resists, as in Dream City (2008), where children’s games ‘re-grow’ on scorched earth, and La Boîte à musique [The Music Box] (2009), where the testimony of children and war victims is linked with ‘one’ image of childhood.)
In questioning the notion of ‘sin’ in various cultures, she commissioned writings from several writers and slam poets, texts that are often dazzlingly beautiful and oscillate between this Judeo-Christian notion and the concept of guilt. During her residency at Jijel in Algeria, she produced Maux de mots (literally: ‘word troubles’ or ‘aches’), inscribing these recollections on the backs of a man and a woman, in red ink. Like history, ink is indelible and gradually fades in the ebb and flow of the sea, where the bodies lie prone.)
Halida Boughriet lends the images of this diptych the oriental splendour of icons and a sacred character through the text that runs and vanishes, like memory failing and inevitably fizzling. This work in the making sparkles with a thousand promises, thanks both to the profoundly humane way that Halida Boughriet looks at things, and to the freedom of her viewpoints and stances, invariably empathising with those whom the world marks with a brand.