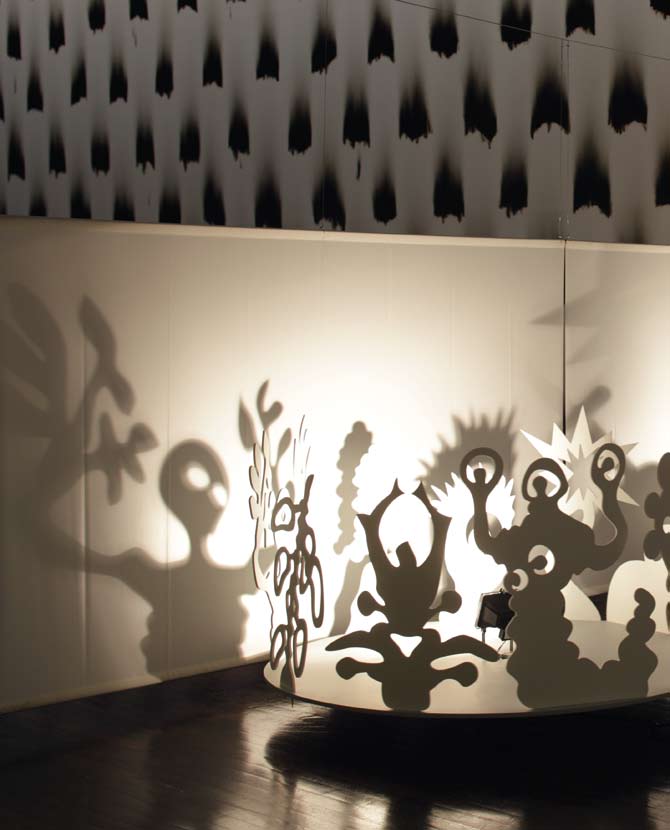 Hugues Reip’s world is one of images – moving images and images in motion, still images and frozen images. He draws on multiple sources, from futuristic science fiction (from Jules Verne to Z movies) and films (from Georges Méliès to cartoons, by way of the earliest experimental films and old school animation films) to art history (from Giorgione to graffiti collected on school desks), collecting, compiling and assembling. Reip’s installations, sculptures and films all issue from the practice of drawing. His apparently simple works are made out of the sparest of means – string and cut-up cardboard boxes – displaying a meticulous lightness. They conjure up a fantastic territory that is reminiscent of a child’s world and is imbued with rock ’n’ roll energy. Hugues Reip, it could be said, deconstructs the mechanics of the spectacle without tumbling into the pitfalls of the spectacular.
The work titled White Spirit (Black Soul) is a good example of this dynamic. Shadows of cut-up silhouettes arrayed on three revolving surfaces are projected on three taut screens. These fantastic figures, material versions of nocturnal spirits, perform a non-stop parade, calling to mind a fairy tale and a carnival.
Originally created for the inner courtyard of the Jardin du Luxembourg for the 2009 ‘Nuit Blanche’, and adapted for display in the MAC/VAL, White Spirit (Black Soul) proposes a re-reading of the Platonic myth of the cave combined with a dance of death in the great medieval tradition. With this magic lantern, Reip offers us a dreamlike meditation in black and white on the illusory, cyclical and ephemeral nature of things. In this shadow theatre, nothing is concealed. The technical system is on view and plays a part in the spectacle itself, in the manner of theatrical machinery during the Baroque period. There is no mystery in the making of this moving frieze. Illusionism is replaced by the manufacture of illusion, thus leaving everyone free to dreamily contemplate the immaterial procession, or to examine the mechanism, or even to embrace the installation in its entirety.