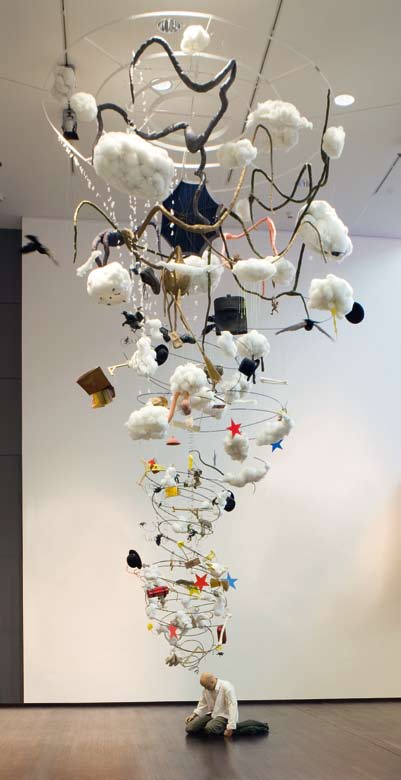 Sculptures, photographs, large drawings, and installations – Gilles Barbier’s work is multiple and plentiful. A foe of logic and definitive truths, the artist comes up with alternative paths for reflection, adopting as his starting point the disruption of his own decision-making process in his work. He thus creates multiple scenarios in order to invent other possibilities, other worlds, and other attitudes.

L’Ivrogne shows us an improbable scene, but one that is astonishingly realistic: a man kneeling, as if crushed by the monumental spiral that seems to emerge from his skull. It is a whirlwind that mixes everything up – the vulgar, the political and the childlike – and that features the artist’s favourite motifs: gruyere cheese, holes, language tapes, comic strip speech bubbles, body parts, earthworms (a portrait of contemporary man as consumer), and several hats, like so many personalities for one and the same individual. Since 1993 Gilles Barbier, displaying a fondness for copies and miniatures, has been casting wax effigies of himself, which he uses in his scripts. Idiocy, perversity, voracity... In a game of identity deconstruction, the community of clones that he creates allows him to explore, by transfer, different more or less eccentric behaviour patterns.

The artist is fascinated by the effects on the brain of psychotropic substances such as drugs and alcohol, the way they can give rise to unpredictable thoughts, as he is by any strategy that makes it possible to escape from an ossified state of consciousness. In 1995 he designed ‘decision-making kits’ to go along with the dwarf clones of Comment mieux guider notre vie au quotidien... [How to best guide our everyday lives...], a fable reminiscent of a novel that was, for many, the bible of non-conformism, Luke Rhinehart’s The Dice Man (1971), or the story of the man bogged down in boredom who decided one day to make all his decisions by throwing dice. He thus adopts a new way of living, ego-free and limitless, with chance permitting him to play a whole host of roles as he rediscovers the child’s joy at being turn by turns a cowboy, an Indian, and a cop.

This wealth of off-kilter characters exposes the frustration of people whose desires, constantly being nagged at and renewed by the consumer society, are never satisfied. By referring us to our own contradictions and the absurdity of our society, Gilles Barbier’s oeuvre is not only overflowing with imagination, but also eminently political.