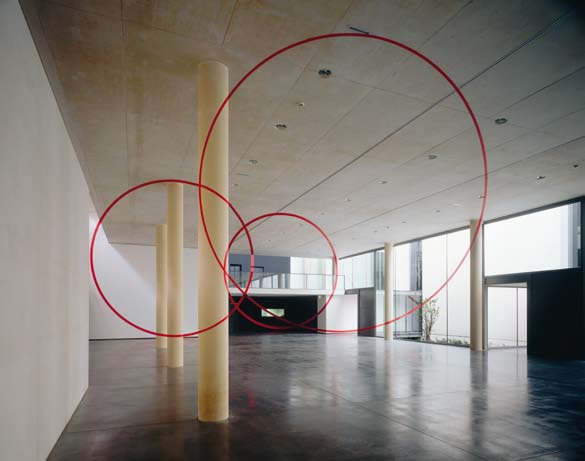 Felice Varini works on the space and the issue of its perception based on the construction of viewpoints. His geometric works hold forth about architecture, on the scale of an interior, a street or a neighbourhood. Developed at the very end of the 1970s, their processes appear to derive from Daniel Buren’s in situ works and Sol LeWitt’s large wall drawings.
For the opening of the MAC/VAL in 2005, Felice Varini marked the museum’s hallway with an installation painted straight on the walls, the windows and the ceiling of the building. He strategically chose an area where people move about, and where visitors on the move have a chance to increase their viewpoints of the work. Based on a pre-prepared composition on a photograph of the venue, he inscribed twodimensional forms on this architecture, exploded throughout the depth of the room thanks to a simple overhead projector. The circular drawings thus projected, first marked in pencil, were painted in acrylic. Working on the principle of anamorphosis,1 three large vermillion circles, floating forms in a virtual plane, appear to the onlooker in the precise place of the initial projection, proposing a secret viewpoint on the building, its design and its distinctive features. Elsewhere in the space, the visitor sees just a jumble of curved lines looking chaotic and fragmented, and extremely dynamic. The process used to conceive and execute the work is based on the rules of perspective used since the Renaissance to create a make-believe depth in the picture, but involving a total reversal. Whereas the system invented by Brunelleschi focuses the vanishing lines on a single point of a plane to create a make-believe space in it, Felice Varini’s work re-establishes the projection of the three-dimensional perspective pyramid and extends it into the onlooker’s very space. Vanishing point becomes viewpoint, at the heart of the viewer’s eyeball. This latter is then put into a situation of perception in which optical experience is combined with the sheer pleasure of illusion, linked with the appearance of a falsely misleading image. In 2010, by updating an inaugural work that marked the view of this building with its modernist lines, artist and museum played with the recent memory of the institution and its public.

M.G. 1. An anamorphosis is a distorted perspective in which the image is unrecognisable except from a precise vantage point.