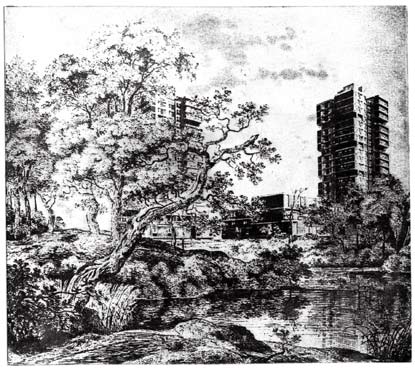 Cyprien Gaillard, who graduated from the ECAL1 in 2005, divides his time between Paris and Berlin. Born in 1980, he is part of a generation that arrived after the end of the ‘grand narratives’ of emancipation and the artistic avant-gardes. He seems to regard the history of the landscape as a whole. With wit, fascination and perhaps nostalgia, he sets out in search of traces of modernity. In Desniansky Raion (2007), he proposes a three-part meditation on modernist architecture. The video successively shows: a brawl between two gangs of hooligans in an apartment complex in the East; the staging, using son-etlumière, of the demolition of a block of flats at Meaux; and, lastly, an aerial view of the city of Kiev that brings out an analogy with the standing stones at Stonehenge. A radically new style, developed by non-academic figures (Loos, Gropius, Le Corbusier), becomes the sign of a vanished or fallen world: the Soviet Union, the Republic, communism. The spectacle becomes funeral celebration whereas ruins and archaeology surge up from beneath the low-rise block. Wit and irony are also components of his work. Thus in La grande allée du Château d’Oiron [The Great Walk at the Château d’Oiron] (2008), he retrieves the rubble from the demolition of a tower at Issy-les- Moulineaux to cover the main walk at the castle. The Land Art revolutions (in situ, use of raw materials, earthworks as a visual gesture) make it possible to transmute the leftovers of an undesirable building into heritage.

With Belief in the Age of Disbelief (2005), the artist introduces contemporary buildings into 17th-century Dutch prints. The series casts doubt on our time-related position. We see simultaneously an image of the past and that of the future (modern buildings turned into vestiges of a vanished civilization). These landscapes, which we may find ‘traditional’ today, are, on the contrary, a pivotal moment: Rembrandt and his peers took reality as their motif. Choosing the landscape rather than religious scenes is a way of saying that a new, more egalitarian society, looking to the Reformation and the Enlightenment, needs new images of the world.

Cyprien Gaillard invites us to see modernism both as the remote heir of the Reformation and as a variant of Roman ruins, whose motif triumphed in European painting precisely in the 17th and 18th centuries.