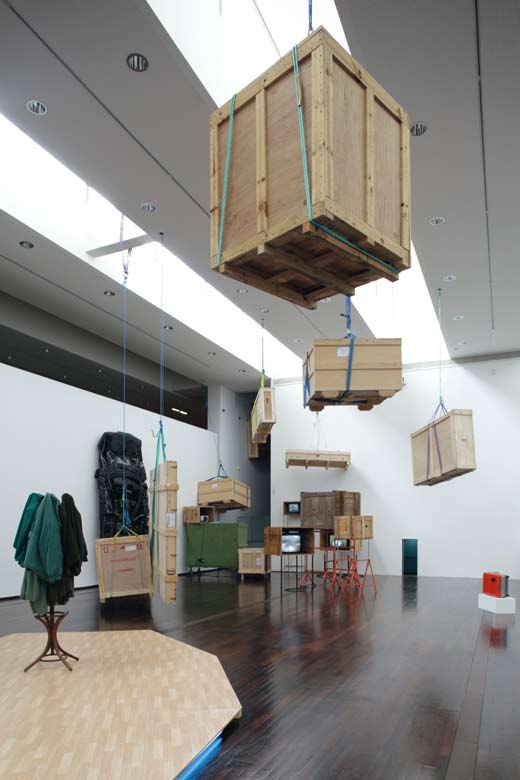 Éric Hattan’s creation, in place from 26 June to 1 November 2009, followed on from a previous proposal by Alain Bublex, which it was intended to echo. So the sculptural stands were re-used for the installation of Béton liquide [Liquid Concrete], a series of video captures, all of which set out to frame poetic and unexpected elements in urban reality. This work takes on the form of an accumulation of micro-events, broadcast in a loop on televisions set up on stands. In a similar echo-like dynamic, the principle of moveable modular structures present in Alain Bublex’s architectural plug-in pieces recurs in Pendant (Ghosttown), an ephemeral installation made up of crates used for transporting artworks hung from the ceiling, as if in transit and in evolution in space. The overall title of this carte blanche, Into the White, also conjures up the counterpoint to the previously installed night-time atmosphere, with Éric Hattan re-illuminating the white walls that epitomise the modernist and contemporary museum architecture of the MAC/VAL.1 For this hanging, the artist has taken from his studio certain pieces to do with the context and theme of the journey, a meeting point between ‘Parcours #3’ and his working method. The artist has decided to show some fifteen works, in a sort of personal retrospective,2 ranging far and wide, including interactions with works by other artists. Working from the context and always trying to cast on things a naive and novel eye (like a traveller), he incorporates this praxis through powerful gestures, such as reversal and displacement, with the works at times seeming to be traces, the leftovers of an earlier process mentally recreated by the visitor.
Thus Autoportrait (Insideout) as well as Coin coin de loin en loin (Pêcheurs d’Islande) [Icelandic Fishermen] play on a fragile, ephemeral sculptural form, produced by one and the same procedure. One focuses on the precarious aspect, with clothes worn by the artist supported by, or suspended from, the museum’s architecture, supports, abandoned by intermingling them all together and turning them around. The gesture of inversion from front to back and vice versa creates a form where the trace of the body comes across as an oxymoron, somewhere between absence and presence, void and packed, softness and firmness. The strong connection between sculptural work and space is invariably conveyed in a mobility and through the question of adaptation.
The artist thus describes his knowledge of interstices, of the space in-between: ‘Look at the architectural plan; re-measure the walls, be present in the rooms, examine the details, understand the history of a space, understand what the architect’s pure space might have been, and what the elements added through the use and function of the place managed to modify.’ As its title indicated, Déplacement, an installation acquired by the MAC/VAL for this carte blanche, is the product one of Éric Hattan’s recurrent gestures, intended to thrust objects into a sculptural dimension.3 In the rooms, a streetlamp, wrenched out of its natural setting, leaning on and supported by a picture rail, traces a visual bridge between two normally separate spaces. Always on, so working, it plays a twofold role: lighting the museum space, and being sculptural. The shift from outside to in gives rise to a series of tensions of scale and axis, bringing volume to the fore instead of void. The use of an item of urban furnishing implies, over and above any spatial reflection, a relation to landscape. In a quite particular way, we find this problem explored in the video works. All the While,4 an installation of eight monumental video projections, which is also part of the MAC/VAL permanent collection, is made up of captures of landscapes in Iceland. Ice, snow either falling or melting, sea, puddles, clouds – water every which way, all weaving a common point between frames. Each one, held fixed without any editing other than the loop that gets them to start all over again, endlessly, and includes these landscapes over time. Recording changes of light and more or less perceptible shifts, plunging the onlooker into a contemplative dimension. These two cartes blanches lend substance to the constant coming and going of the institution, between living creation and heritage, which we might think to be antithetical. The forming of a museum collection is an act of memory and the openness to in vivo interventions on this latter seems to have two consequences: making the hanging porous and sensitive to the issues of living art, to the most current ways that artists look at things; in tandem, this confrontation gives rise to works finding their way into collections, and thus in osmosis with them.

1. We could also round off the title: ‘Into the white cube’, a term used in the history of modernity to describe the minimal, standard museum venue.
2. Made between 1988 and today, the works stake out the artist’s whole period of activity. Éric Hattan Wettingen (Switzerland), 1955 lives in Basel and Paris
3. In Faites du neuf avec du vieux, the artist proposes the creation of a new space in a gallery or apartment by arranging the objects present in the place in a different order.
4. All the While was kept for a longer time than Éric Hattan’s other works in the rooms, until 11 April 2010.