The art of Nathalie Talec (born 1960) constitutes a portrait of the artist as explorer, a self-portrait with or without storm microphone, with or without glasses for assessing distances in a cold land. The exploration of the polar regions (discovery, surveying, mapping and survival techniques for extreme conditions) becomes a metaphor of art in its quest for the absolute and the elementary.From her ﬁrst imaginary or real expeditions to the Frozen North to the exploration of systems for representing the world – from the science of pop songs to sitcoms – Nathalie Talec is interested in halfway states, intermediate positions and zones of uncertainty. Thus, what she is really probing in her combinations and agglomerations from various sources (the histories of science and art, personal anecdotes, etc.) is the ﬁctionalisation of the real.

Ever since her ﬁrst works made in 1979, the artist has been the central ﬁgure in this experiment with or experience of the world.

For Nathalie Talec the manifestations, narratives and mythologies of cold, but also its contrary, and steam and condensation, too, constitute tools for situating herself in the world, an instrument of analysis and subjective location, of metaphysical reﬂection.Paradoxically, cold is a state with rich imaginary and symbolic connotations, yet at the same time it creates a sense of distance: it freezes and immobilises. The artist’s constant use of the feigned, the factitious, of artiﬁce, simulacra and lip-synching, all partake of this twofold movement of immersion and withdrawal.

This ﬁrst retrospective charts an artistic adventure that began thirty years ago. Neither chronological nor exhaustive, it brings together some thirty works (drawings, videos, photographs, sculptures, performances, projects) like so many ﬁctional markers, initiators of narrative and decoys. It units vintage pieces, recreations and new works in a novel ensemble, a conception that is itself literally an artwork.

This first retrospective of Nathalie Talec, a French artist born in 1960, retraces 30 years of a creative and artistic adventure.

This display is neither chronological nor complete, but it assembles about thirty of her works (drawings, photographs, sculptures, performances, projects …) like so many fictional markers, narrative initiations and illusions.

Older vintage works, recreations, new productions are all brought together in a new-fangled ensemble, artistic design which is literally the artwork, borrowing some cinematographic practices and industrial imagery.

Self-portraits, masks, transfers and other metamorphosis

“A self-portrait isn’t an abstract practice. It copies a model. A self-portrait opens up doors for new details and subjectivity, that of a negotiated identity, a detour, a staged me. A self-portrait is done using diverse mediums like drawing, embossed photography, sculpture and video, thus allowing me to explore and implement the nature and value of this work experience. […] In some drawings, the self-portrait becomes a generic person, a simple and expressionless pattern which lets me reintroduce the model, giving him transparency and ability to act in his own world. The person represented is only worthy by what he does or the attitude given to his action.”

The artist as an explorer

“There’s only one goal in our progress which is to define our position. We’re crossing an unknown land and we remain constantly ignorant as to what awaits us, but our walking pace doesn’t change[…].”Knud Rasmussen, Du Groenland au Pacifique: two intimate years living with the tribes of unknown Eskimos. 1929.

In an interview with Claire Le Restif, she explains her idea of polar exploration being a metaphor of artistic experience.“I think there’s a lot of similarity between the polar explorer and the artist. They both dare into unknown territories, and defy challenges on a daily basis, whether in of discovering, survival attempts and exploring the unknown. They both want to find an issue, a shape, by a shift, a movement, an object, or a summary. This all seems to unite these two people who I’ve taken on since the beginning of my artistic life. This has nothing to do with the body and its resilience, but more with what makes a man in his environment, in his sensations, his way of thinking […].”

The artist as a scientist

“I perhaps have a sort of fascination for science and its views, conjointly apprehended by scientists, philosophers and artists since the Renaissance period …for all that which is innumerable and undetectable after being observed and experimented …”

(...) If science interests Nathalie Talec, it’s the language, an investigation system of reality, an amount of knowledge to reinvest using the imagination and way of talking about the world. To test these codes and approach, the artist embraces the gestures of the laboratory assistant and mimics the position of the lecturer. She goes as far as putting her signature to an innovative measuring system.

The artist as animal

“The deer has become my icon and today wonders about the question of knowledge, art and language throughout works as diverse as performances, photographs, drawings or even songs”.

Since the year 2000, Nathalie Talec uses the ambiguity of this cross breed, the deer, to multiply references and act in different contexts such as tales and art history, the media world and archaic mythology.

The artist as a poser

Nathalie Talec goes on stage and plays the part. Understanding her personas and stance as singer is also like considering “posture art” as some sort of art expression. She’s a worthy heiress of the “Fluxus attitude” contributing to the appearance of a pop-music media figure.

As for her sources of inspiration, she draws on scientific literature, mythology but also from television and media hero invented for an audience searching for sensations like in sitcoms and popular variety shows to delve into both the intimate and romantic. 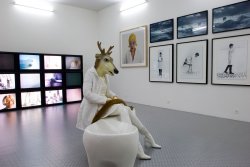