For a long time I dreamed about it – there was a before and there’ll be an after. This is a passage. With Après, the second act of an “opera” whose first, Personnes, is being shown at the Grand Palais for the Momenta Contemporary Art Exhibit, Christian Boltanski has us adventure to “the other side”. In this installation he reconciles the different periods to MAC/VAL’s dimensions. He lures us into his vision of the beyond, tangible, existing, and almost reassuring as it’s portrayed as black on an abandoned reality. A familiar beyond with friendly voices welcoming us, yet worrying with this drawing of endless meandering.

We wander between the walls of a black city, within a trembling present amidst this “kaaba” burdened with history and operating by the inspiration of compacted project and well-arranged, locked-up souvenirs.

If “the time left” is a gambling matter for Christian Boltanski, the time to come is made of a concentrated past full of personal lives which can be unfurled as a story. The latter should be written, with each step, along these ghost streets where light pounces on each person from each encounter. Because this is the program and it’s really something worth seeing! Go wander around, but as a group! Around the corner on the other side of a wall is a person with a story to tell.

Christian Boltanski likes telling stories. With Après, he invites us to invent our own story, “Things in life” which are supposed to appear, dazzling, at death’s dawn, where the past, present and future gather together. Time is his matter, his subject. He uses it to embrace, emerge and hold us back in this harmonious, vertiginous work of art. Alexia Fabre

Extract from the Petit Journal

For the MAC/VAL, Christian Boltanski created a work of art, an exhibition and an environment where the visitor is invited to experience an extraordinary adventure with there’s no turning back …. “Après”. In parallel to his invitation to the Grand Palais for the Monumenta 2010 Contemporary Art Exhibit where his project talks about life, his exhibit here has us face death. The visitor crosses the picture of an anonymous face and suddenly finds himself in a dark city where the solid and black geometrical architectural components create a path which appear in the meandering to come.

In this dark and worrying environment, the light (in both the literal and figurative meaning) spotlights encounters. Only the men walking – a reference to Man’s existential quest, so magnificently depicted by Alberto Giacometti, bear this light by asking visitors question regarding their presence, their death, etc… in a happy manner. Christian Boltanski has made collective historical memory the most intimate of his themes. He conciliates these two often-opposed expressions to tell better stories about an invented fact, sometimes mentioned, but never described. Life and its opposite, death, are the subject of his work of art. With tangible traces, their lives are expressed by photographs, archives, objects such as clothes, coats, monuments which celebrate them, and by voices which remember.

His created environment is similar to theatre, along with the presence of space for the visitor. Here he invents a world to come, made of compacted memory in architectural structures, blown by the wind, and by the breath of life and voices – human, comforting, reassuring about this unknown future. The visitor is therefore just visiting and leaves to return to the present world but nevertheless affected by this fleeting and breath-taking experience … 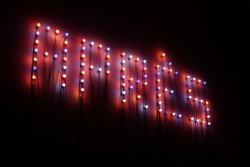 At the beginning of 2010, Christian Boltanski - invited by the Head Curator Alexia Fabre - creates and implements the second part of his exhibition-event. His presence at Vitry-sur-Seine, from January 15 to March 28, 2010, annotates one of the major objectives of the museum – presenting honorific figures of contemporary art in France. For the MAC/VAL, Christian Boltanski designed a completely new and powerful installation baptized “Après”, presented like a blockbuster, inciting the audience to jointly experience this imaginary world, a world far and beyond. This is a new stroke of genius for the French artist Christian Boltanski who designed an exhibit “Personnes/Après” - two stories which are unconnected and independent on the surface, but which both plunge the visitor to the heart of the artist’s most intimate obsessions. For over three decades he’s incessantly repeated and broken down themes inherent to human fate with the ever-present question of identity and dangerous division between truth and illusion. For this exhibition in two distinct places, Christian Boltanski continues developing this unclassifiable work of art, a universe where emotion remains inalienable with categorical concerns.

For his MAC/VAL installation, he again achieves to radically transform the museum space into a rhapsodic playground, appealing the visitors to literally adventure to the “other side” for the unlikely experience of the “Après”. Anonymous crowds defiantly walk past on the three curtains leading to the exhibition room. As soon as a visitor enters, these images stop. Perfectly controlling the smallest details and deleting all form of natural light, the public discovers the installation and becomes a spectator-actor of a disturbing ghost town, happening across strange encounters while wandering about. Christian Boltanski’s walking men are shadows among the deceased, constantly asking the same questions, “And how did you die? Did you suffer a lot?...”. Far from giving any answers, this torrent of riddles results in new questions, entangling the visitor in a universe alternating between absurdly serious and ludicrous.

“Après”, is an environment which puzzles reality, upsetting values and jostling interpretations, waivering all your senses.

This new proposition is part of the overall work of the artist which he defines as a cluster simultaneously revealing endless problems and a non-desire to ever want to have them resolved. Christian Boltanski’s work can be interpreted as having no real story, but that this story is continuously reinventing its own geography.

Boltanski is a good-natured and enigmatic painter who has chosen to tell us little stories in his two-act exhibition, by using the graphic vocabulary of his time. For the MAC/VAL and the Grand Palais, he displays his installations as he would paintings for a play. According to his own words, it’s all about merging “the visual arts which are an art in space and theatre which is an art in time … For this project, I’m trying to combine both and create a progression. We’re no longer in front of something but more inside something. That’s what really interests me today.”