MAC VAL is presenting the first monographic museum by Taysir Batniji, bringing together a selection of over fifty works produced over the last twenty-five years. This retrospective highlights the resonances between the different pieces, which are conceived in a permanent dialogue with the history of art, and historical, geographical and political reality, from the artist’s singular and personal viewpoint. Taysir Batniji studied at An-Najah National University in Nablus and followed up his diploma there with a period at the Beaux-Arts school in Bourges (1995-1997). From his early pictorial approach, he moved quickly towards more conceptual objects, and gradually began using photography and video. No medium dominates in this art which weaves links between private and public space and explores questions of identity, displacement, memory, attachment, disappearance, absence, frontiers, exile and traces.By bringing his personal experience to bear on current events, Batniji sheds light on situations that are culturally and geographically in-between. While his work often reveals a poetic perception of reality, he has never stopped subtly and humorously pointing up the difficulty of constructing one’s identity around a crack, a wound that is as personal as it is shared.

‘To write: to try meticulously to retain something, to cause something to survive; to wrest a few precise scraps from the void as it grows, to leave somewhere a furrow, a trace, a mark or a few signs.’ Georges Perec, Espèces d’espaces, Paris, Galilée, 1974

MAC VAL is organising the first monographic museum exhibition by Taysir Batniji. Covering nearly twenty-five years of work, this exhibition brings together some elements from his prolific output and sets about exploring its multiple aspects. Best known for his photography, Batniji is a protean artist who works on a humble, human scale. From his early pictorial approach, he moved quickly towards more conceptual objects, using photography and video. Gradually, conceptual yet personal objects came to the fore.Privileging no medium in particular, he makes palpable the cultural and geographical intermediate space that is his heritage, navigating between the Middle East and the West, the private world and public space, poetry and politics. Each of the “stones” he thus assembles enables Batniji to articulate a mobile definition of his own identity, to affirm his existence in the world, in spite of everything.As if the best way of talking about the world’s disasters was bound to be in relation to the self, one’s personal situation. As if he was permanently giving (himself) proof of his existence. In order to better resist.Batniji’s work focuses on traces, memories of a form, a gesture, the memory of a journey, the absence of a dear one, exile from a territory, the disappearance of an image. In a permanent dialogue with art history, his grounded works reprise and answer each other over time.The exhibition brings together paintings, drawings, photographs, videos, installations and performances (from 1997 to 2021) in one great self-portrait, while offering a dynamic reflection on the question of identity. Paraphrasing Georges Perec, the exhibition title leads us into a melancholy space where separation and displacement are driving forces.

Julien Blanpied and Frank LamyCurators of the exhibition 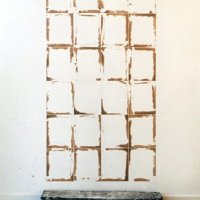