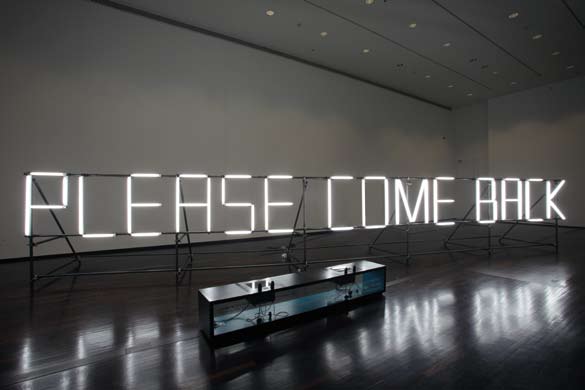 Claire Fontaine is both the name of a famous brand of school exercise book and a tribute to Marcel Duchamp’s Fontaine [Fountain] (1917). She is also a ‘readymade artist’, the way the collective made up of Fulvia Carnevale and James Thornhill defines itself, which plays with issues of style and signature. Claire Fontaine ‘pushes to the midst of the ruins of the auteur function, by experimenting with collective production protocols, appropriations and hijackings, and the introduction of different arrangements for the division of intellectual property and private property’.1 In the face of the disappearance of forms of unusualness, and with commercial utopia, Claire Fontaine puts herself in a posture of oddness, backing away from the question of style to merge with the industrial forms and methods of production which the American Conceptual and Minimalist artists of the 1960s and 1970s had already used.

The installation Please come back (K. Font) is an industrial sculpture. It takes the form of a monumental lit sign using the K font (created by the artist) and held in place by scaffolding, a cheap assembly system often used for signs. The work plays ambivalently with visitors, inviting them to draw near to trigger the lighting mechanism, but also to move away, in order to protect themselves from the aggressive radiant light from the neon lights. Please come back sounds like a slogan. But who’s talking? Who’s talking to us? ‘The sign reacts to the movements of bodies in space and its meaning can be interpreted in differing ways, from a parody of the message addressed to the consumer leaving the shop, to the melancholy feeling of irreparable loss of a moment of grace or a loved one.’2 In 2008, in a light installation of the same kind, the artist declared Please God make tomorrow better, halfway between entreaty and authoritarian request. But ‘there are passwords beneath slogans’.3

Behind this pseudonym with its overtones of truancy, Claire Fontaine has been investigating the links between culture and consumerism since 2004, along with the universalisation of language for ideological purposes. The size of the installation makes the message (‘please, come back’) crushing, not to say scary, unlike the invitation it is extending. Claire Fontaine thus overexposes a paradox well-known to advertising people for its strong manipulative potential: the formula between sentimental invitation and authoritarian injunction.