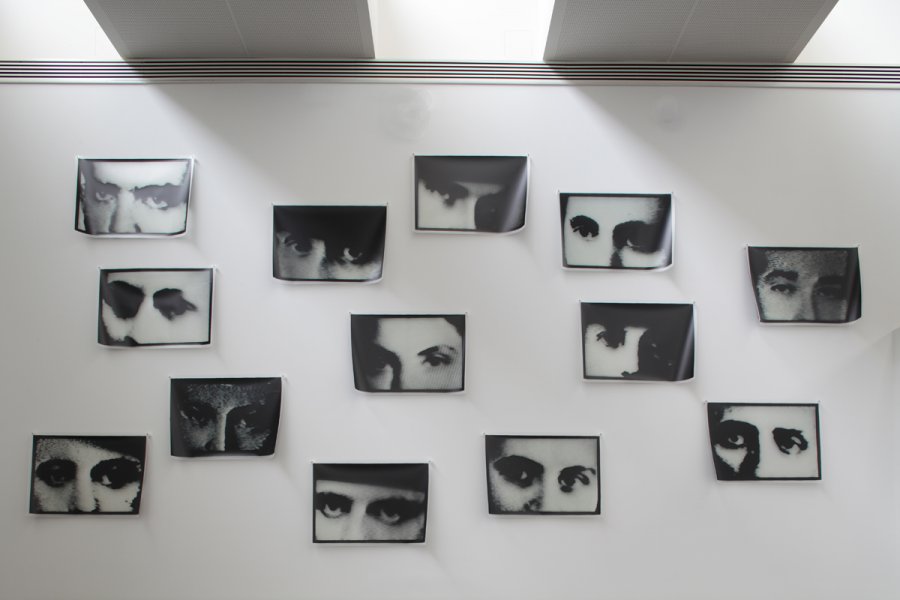 Christian Boltanski is interested in other people’s lives and histories, great and small alike. He pursues individual narratives that are brought together by fate, chance and human infamy, and, when accumulated, represent the world’s disorders. In paying tribute to them, he makes a stand against inexorable oblivion. He posits as the real drama the disappearance of each and every individual in History’s mass, and thus tries to shed light on traces, at times an idea of what everyone has been: the inventoried objects that survive people – a name, face, breath, piece of clothing, voice, heartbeat – more and more impersonal and abstract traces, henceforth recognisable. His personal (hi)story is deeply rooted in the traumas of the Second World War and the Holocaust. Born in Paris during the German occupation, while his father, of Jewish origin, hid under the floor of the family apartment to escape deportation, he spent his boyhood watching how others lived, and invented a life for himself, then a praxis and an artist’s life.

It was only natural that he should find his way into the ‘Paris scene’, then made up of Annette Messager, Gina Pane, Sarkis, Jean Le Gac, and Paul-Armand Gette, among others, all artists involved in the invention of ‘personal mythologies’. Christian Boltanski never really studied, because his youth was spent buried in the family circle. In it and in himself he found the material for his work. Later, he always clung on to the domestic economy of the work, wholly made up of banal familiar materials, often pre-existing, always easy to obtain (clay, plasticine, sugar, photographs, biscuit tins, clothes).

In the early 1970s, he excavated and invented his own memory by re-creating in his works the gestures of boyhood, recalling the child he perhaps was. Later, his work was constructed from his own private experience of the world and his love of life, and for other people’s lives, in an ongoing back-and-forth between the world and himself.

Using allegedly autobiographical expression, Christian Boltanski describes the world’s music and its basic inhumanity in increasingly theatrical works. Nowadays he embraces space, creating environments where time and space combined use visitors as witnesses, as in Personnes [People], a project for Monumenta (Grand Palais, Paris, January–February 2010), at the heart of an installation that places them before history, both past and in the offing. Today, the future occupies an essential place in his work, a counterpoint to his past production, bringing history into the present, a present now tinged with a composite future. Thus it is that the island of Teshima, in the Sea of Japan, has housed his Archives du Coeur [Heart Archives] since July 2010. Monument is part of a series started in 1984, a key creative period in the artist’s life. After delving into his memory and bringing up to the surface of the present the gestures and (real?) objects of his boyhood, in the 1980s his work shifted towards the lives of others. A monument to an undefined but recognisable history, this work creates a muddle of these feelings, which are the fulcrum and challenge of his oeuvre. Past photographs, scratched by electric wires, of children, flowers and gold paper, form a monument to interrupted destines, to vanished childhood, to happy bygone goings-on, still held by the light of memory, ridiculous little bulbs, a sublime and pathetic effort, doomed to failure.

Les Regards is a work that has just joined the collection. Here, too, there are images, but snippets of faces, fragments of people. The decision to retain only the eyes bolsters our unusual relation to the work. Christian Boltanski stages a situation, an almost unbearable face-to-face, so history-laden is the relationship of each one of the people. Here we have fractions of faces of men deported to the death camps, image captures of a TV programme.

Implacable eyes, and gazes, and yet still unaware of their mortal fate, unbearable in the light of the history we now know about, impossible to tolerate for the person looking at them. These ‘portraits’ are nevertheless removed from any realism; they are now just recollections informed by the gust of memory’s wind. No eloquent reference – they are hard to identify and anonymous, unknown, the better to recognise oneself therein.

Today, Christian Boltanski combines the three forms of time to make tomorrow’s history with yesterday and today; he tells of Time’s inexorable march. Like a demiurge, he plunges visitors into his own anxieties, as in Après [Afterwards], his project for the MAC/VAL (January–March 2010). After running aground on the lives of others, he makes his own death the subject of his oeuvre, like a challenge tossed to fate, and to himself.