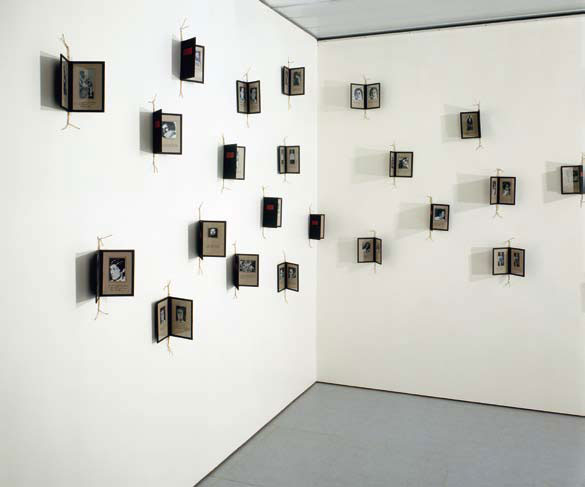 How many lives there are in Annette Messager’s life! In the early 1970s, at the heart of the ‘Paris scene’ (made up of Christian Boltanski, Sarkis, Paul-Armand Gette, among others, most of them men, apart from Gina Pane, presenting their ‘personal mythologies’), Annette Messager invented for herself as many lives as she needed titles, each one helping her to be other and invent different artistic projects. For each one of these ‘Annettes’ she inventoried a repertory of gestures and practices, attitudes and subjects, revealing all at once the female world, its genetic code and the possibilities of escaping from it, and its buried desires. Annette Messager continues to wrap her world, perhaps more private than ever today, tightly around her, as it becomes more serious and solemn, ‘artist messenger’ in a world of brutes.

Les hommes que j’aime, les hommes que je n’aime pas brings together two albums of Annette Messager the collector, the one who operates in the studio section of her apartment, gathering and annotating photographs. For reasons precisely more peculiar to men (aesthetic reasons, hasty and superficial judgments), she judges and reverses her judgment on these men pinned to the wall in small black frames (mourning?), flighty, as if proud of what some might call female fickleness. Methodically assembled and filed, this collection of peremptory and contrary judgments asserts the right of the woman artist to judge men unilaterally. At her retrospective show ‘The Messengers’ at the Hayward Gallery (London, 2009), Annette Messager brought together in the selfsame installation two collections made in 1972: Collection pour trouver ma meilleure signature and Ma collection de châteaux. Here, rather than claiming the right to judge others, it is her own right to invent herself that she challenges, contemplating and exploiting her desire to become, and appear like, a cultural, sexual, existential datum, a datum between a desire to manufacture herself and constraints and social expectations, inevitable steps in any woman’s life. The signature is actually a public appearance of oneself, invariably claiming to say a great deal about the personality you want to put across. Her name is repeated on 90 sheets of paper. Annette Messager here seems juvenile, childish, mutinous, hard, strong, calm and composed, nervous. The counterpoint would be Comment mes amis feraient mon portrait [How My Friends Would Make My Portrait] (1972–1973). Ninety ‘I exist’s, then, in every way, shape and form; attempts to invent oneself, for oneself’s sake, but also in the eyes of others, caught vice-like between the wish to be herself and also what society expects of a young girl: dreaming of prince charming while drawing castles, thinking of living happily in them and having lots of kids.

So many cultural archetypes, which trace on the wall a puzzle portrait of the artist, a monument to a determined youth, whose models are arrayed in the fictitious autobiography of the 1970s, as in Voyage à Venise [Journey to Venice], a four-handed work made with Christian Boltanski, and Le Bonheur illustré [Happiness Illustrated] (1975–1976). If Annette Messager does not systematically rail against female practices and obligations, she makes them the raw material of her oeuvre by using them the better to foil and taunt expectations.

Many years elapsed between this groundbreaking work and Les Restes. Annette Messager became a cheat and invited herself into the world reserved for voyeurs and peeping toms, she became a fairy and a witch, depending, looked at her mother and old age, nicked objects (long live the Revolution!) and stuffed toys, which, in 1998, became a recurrent element in her formal vocabulary. As ex-votos of childhood, they also recount the violence of that age of life: when cut, these beings emptied of their kapok stuffing and their soul alike evoke a humankind torn asunder. Les Restes nails the tradition of the family portrait by summoning a thoroughly masculine gender: the hunting trophy rather than household bliss. The quartered animal bodies, like members of the family, are arranged in a semicircle, drawing sun-like on the wall. Just as she had reared her ‘little boarders’ in the 1970s, so Annette Messager here rediscovers animals – today stuffed toys and traces of childhood, which she mistreats by creating a sense of malaise. Like an entomologist, she dissects our cultural habits, questioning the situation of woman, but also the more universal one of beings in the contemporary world. Her determinedly unusual, not to say solitary, oeuvre is nowadays deployed in space, more staged and at times scripted, like the installation Casino for the French Pavilion, winning the Lion d’Or at the 2005 Venice Biennale. Always re-enacting the same techniques of the female ‘tradition’, she steals its condition the way you crucify what you want to sacrifice, but paradoxically retain.