Karina Bisch (born in 1974) and Nicolas Chardon (born in 1974) are each developing a singular body of work that follows on from the utopian projects of the historical avant-gardes of the early 20th century (Bauhaus, Futurism, Suprematism, De Stijl, Dada, etc.). They practise a ‘painting for living’ that is both learned and burlesque. Their respective researches are enriched by the works they made à deux.The exhibition pokes fun at the idea of the pavillon: the architectural follies programmed by the Universal Exhibitions, dwellings, standard housing... and proposes an immense ‘living machine’ that brings together works made individually and as a duo in an original display that is part showcase, part architectural model and part décor, abolishing the border between art and life.The exhibition continues in a publication edited in partnership with CONNOISSEURS, the publishing house and structure for the production and distribution of multiples founded by Bisch and Chardon.

Frank Lamy, curator of the exhibition :

The title of the exhibition sets the tone: it will be about love, modernity and rock’n’roll (1).

Karina Bisch and Nicolas Chardon were both born in 1974, met in 1990 when at school, and live and work in Paris.

Their unique pictorial worlds follow on from the utopian projects of the historical artistic avant-gardes of the early 20th century (Bauhaus, Futurism, Suprematism, De Stijl, Dada...). They make ‘painting for living’ that is both learned and burlesque. Their individual explorations are enriched by the projects they work on together, while they are united in their concern with the deconstruction of certain forms and their related histories. The history of the arts, of exhibitions, of painting, decorative arts, design, graphic design, signage, rock‘n’roll, among others, nourish the practices and actions of both artists. A couple in real life, sharing the same studio, Bisch and Chardon regularly collaborate on each other’s work. Each one develops a singular universe; each is also the first eye to gauge what the other does. While Bisch’s work tends towards proliferation, Chardon tends towards a form of reduction and repetition. On the one hand, the variety of colours and motifs; on the other, black and white and the predominance of the square. The notions of reworking, collage, disjunction, and the handmade, among others, feed these pictorial deconstructions. For Bisch and Chardon, painting is a way of inhabiting the world. The works are layered with numerous references, from the most learned to the most popular and vice versa. Nevertheless, these are never reduced to the exploration of self-referentiality. On the contrary, the works are open and resonate with the experiences of each viewer.

Invited to exhibit together at MAC VAL, Bisch and Chardon have imagined this project in the form of a pavillon; a house. The exhibition brings together their individual works and others they made together, attempting to give substance to the artistic production of a couple in an original display that is part receptacle, part maquette and part décor, doing away with the frontier between art and life. 1 + 1 = 3.A display that pokes fun at the idea of the house or pavilion –: the architectural follies programmed for universal exhibitions and other biennials, the dwelling, the standard, etc. – and that proposes an immense ‘machine for living’, to quote a famous phrase by Le Corbusier. A display that conjures up the model house, the model, the board game, the showrooms of shops, the ‘period rooms’ of museums of civilisation, cinema and theatre sets... ‘we build a house for our paintings while painting itself inhabits us’ (2). The audio guide, traditionally entrusted with the role of providing commentary, here becomes a character, an inhabitant of the pavilion. The exhibition is also continued in the book published in partnership with CONNOISSEURS, a publishing house that produces and distributes multiples created by Bisch and Chardon. When the pictorial system for reducing the visible invented at the beginning of the 20th century by the Dutch painter Pieter Cornelis Mondriaan ends up on an iconic dress and then becomes the image of a cosmetics company.When the figure of Pierrot, oh so moody and melancholic, becomes the logo of a confectionery brand.When the modernist grid develops into a cross-stitch.When the square becomes a pixel. 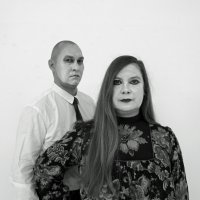