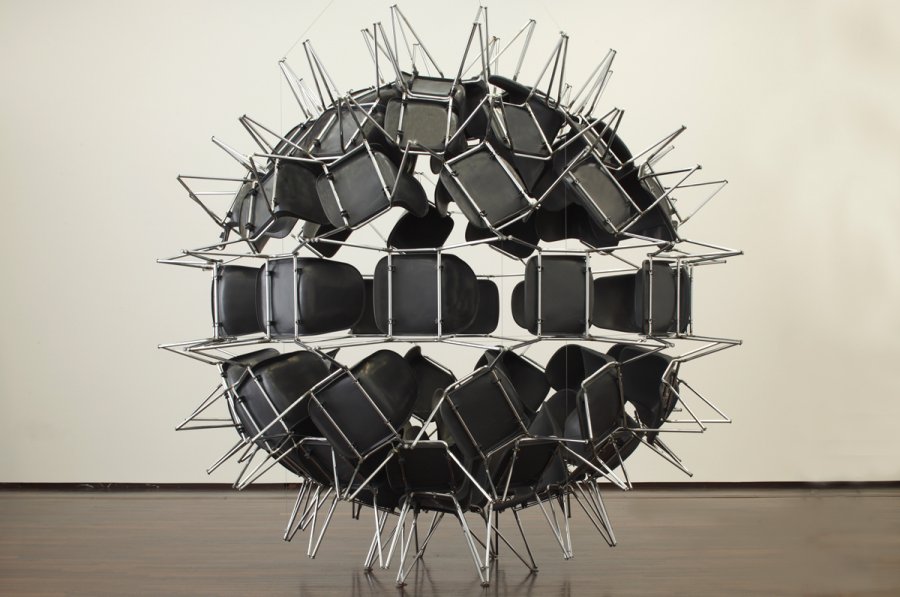 The title Black Whole Conference encompasses, through homophony, the black hole as scientific phenomenon and the idea of collective discussion. Defined as an absence of matter, the black hole is part of a consensual representation of the world. Illustrated here by a conversation that runs on empty, it raises the issue of the authority of discourse. The installation consists of a group of chairs fixed one to the next by the legs so as to form a sphere. Each part of this utopian architecture guarantees and shares with all the others the stability of the whole. In a chivalrous ideal, the form of this assembly, like that of king Arthur’s Knights of the Round Table, avoids any kind of precedence, guaranteeing perfect equality between its members.

Paradoxically, and like an avowal of failure to reach consensus, it is physically impossible to sit at this fictitious assembly which, ready to pounce, seems to prefer autarky. Through the sphere, the artist alludes to the history and memory of Western thinking, the globe as image or object to represent the world (celestial, then terrestrial), forcing adhesion and obliging people to seek out their position in relation to the central point. The spectator’s outer place when looking at Michel de Broin’s work calls to mind the situation of the person tempted to prefer a make-believe spectator’s life to the experience of reality.

As if to bring the loop full circle, the choice of the chair model used for this sculpture helps the artist to link 2,000-year-old mathematical globalisation with present-day terrestrial and economic globalisation. It is an ersatz of the Polyprop chair created by the British designer Robin Day in 1962. With more than 14,000,000 units produced, this key modern design has become a standard item, a worldwide sign of the professional environment and the community, a reminder of a modernist utopia whose intent was to make the beautiful a consensus; this chair is nowadays one emblem among others of a global economy.