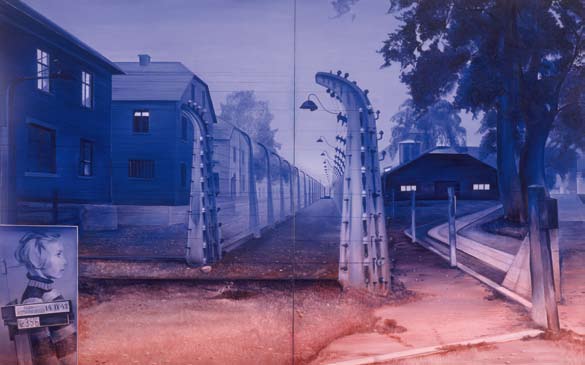 Since the mid-1950s, Jacques Monory has been deconstructing the image. Closely linked in the 1960s and 1970s to what was then known as Figuration Narrative, he has since been tirelessly – and in spite of fads and fashions and the ebb-and-flow of trends – pursuing his own unusual painterly venture. Alain Jouffroy has described him as a ‘revolutionary individualist’.
Monory paints in series. Imbued with film references, his pictures work like enigmas that cannot be resolved, remaining open to many interpretations. A veritable inventor of myths, his pictures function like narrative primers and shifters of stories. His work is metaphysical, deeply autobiographical, and solemn, yet full of wit; and it is obsessed with death and disaster. The subjective exploration of reality is one of its mainsprings.
This world of images – images that are painted, dissected, fragmented, inlaid, mounted, assembled, mistreated, manhandled and battered, and at the same time magnified and necessary – is filled with signs, motifs and elements transferred from picture to picture, which become quasi-characters in this film noir being enacted before our eyes. It conducts, head-on, an existential meditation on, and critical analysis of, the image, its procedures and its powers. The images and models of our inner representations are turn by turn ‘Toxiques’ or else ‘Fragiles’. Tigers are tamed, reality is a frozen opera, explosions are colourful and murders amused. The world is in Technicolor, Monet is dead, images are incurable.
The series ‘Hommage à Caspar David Friedrich’ is built on this essential melancholy. In it, Monory, following in the footsteps of the German painter, a key figure in ontological Romanticism, explores through paint the place of man in the contemporary landscape. Aerial images of catastrophes, bucolic landscapes – all attest to a way of looking at things that is disenchanted and uncompromising. The series opens with Hommage à Caspar David Friedrich no. 1. This ‘magnificent and fearsome’ picture, to use Pierre Tilman’s words, depicts a deserted death camp with its huts and electric fence. At bottom left, inset, is the anthropometric profile of a young Jewish woman taken from Nazi files. This solemn painting is striking for its pink and blue colours and its tranquil silence, tallying in a paradoxical way with the scale of the catastrophe.